Softball and men’s tennis placed second at their respective tournaments while baseball advances to the SAA Tournament Championship series to be held May 3-4. Rhodes also had nine records tied or broken. Here’s a recap.

Women’s golf won the SAA Championship for the fourth time in the conference’s seven-year history. Senior Emily Salamy won the three-day tournament and was named Player of the Year while freshman Susan Morris placed second and earned Newcomer of the Year honors. The three-time National Champions and current sixth ranked Lynx will travel to Houston, TX, for the NCAA Division III Championship this year.

Men’s lacrosse defeated Sewanee 13-7 in the semifinals before beating Berry 15-8 to win the SAA Tournament Championship for the second year in a row. First-year Christian Cisneros tied a single game record when he recorded six assists in Friday’s semifinal victory. Prior to the tournament, first-year Alexi Thomas was named the SAA Newcomer of the Year. The 15-3 Lynx earn the SAA’s automatic bid to the NCAA Tournament. They find out specifics on Sunday, May 5, at 9 p.m. ET on ncaa.com.

Women’s lacrosse defeated Centre 14-10 to win their fifth consecutive SAA Tournament Championship. Prior to the tournament, first-year Bailey Barker was named SAA Newcomer of the Year. The 13-3 Lynx earn the SAA’s automatic bid to the NCAA Tournament. They also find out specifics on Sunday, May 5, at 9:30 p.m. ET on ncaa.com.

Softball went 3-2 this weekend and end their season with a 27-16 record. Rhodes defeated Millsaps 4-2 and Berry 6-5 before falling to #8 Birmingham-Southern 6-1. The Lynx then defeated Millsaps 5-4 in the elimination game, advancing to the SAA Tournament Championship game for the second year in a row. Rhodes’ season came to a halt with an 8-2 loss to #8 BSC. During the tournament, Jill Healy and Kendall Henry broke the program’s career games played record. Twenty-seven wins is a career-high mark for head coach Luke Wagner and the most wins for the Lynx since 2014.

Men’s tennis defeated Berry 5-0 and Oglethorpe 5-2 to advance to the SAA Championship match for the first time since 2013. The Lynx placed second after a 5-2 loss to #20 Sewanee and end the season with a 14-7 record. During the tournament, junior Ritwik Chatterjee picked up his 100th career victory.

Women’s tennis defeated Berry 5-3 before falling to Centre 5-1 in the semifinals. The Lynx finish the year 13-5, the most wins for the program since 2011, and a career-high mark for head coach Jenn Tinnell.

Track and Field swept the SAA Championships for the second straight year. The Lynx totaled 28 top-three finishes and the men earned 1-5 finishes in the 10k. Senior PJ Settles broke the SAA and Rhodes record in the triple jump while freshman Billy Clark now owns the fastest 400m time in Rhodes history. The Lynx women have now won 12 consecutive conference championships.

Non-related to spring championships, senior DJ Coker was signed as a free agent with the NFL team Houston Texans. The offensive lineman has been invited to training camp beginning May 10. 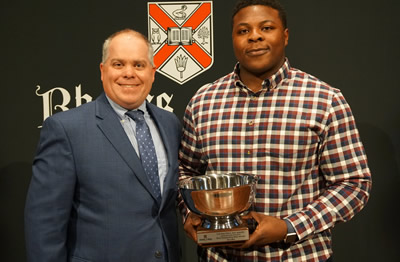