Nov. 10 Launch Set for Prof. Jeffrey Jackson’s Book About Artists Who Risked Their Lives to Defy the Nazis

Rhodes College Professor of History Dr. Jeffrey H. Jackson describes his new book as the “World War II you’ve never heard before.” Paper Bullets: Two Artists Who Risked Their Lives to Defy the Nazis (Algonquin Books, 2020) tells the story of Lucy Schwob and Suzanne Malherbe, who drew on their skills as Parisian avant-garde artists to use psychological warfare to demoralize and intimidate Nazi troops occupying their adopted home on the British Channel Island of Jersey.

The launch of the 336-page book is Tuesday, Nov. 10. Jackson will talk about and read selections and answer questions from viewers in a Zoom webinar beginning at 6:30 p.m.(CST). The webinar is free, but registration is requested: https://rhodes.zoom.us/webinar/register/WN_-zHEm0BrQ7KkojQNGpBwGQ

Hunted by the secret field police, Schwob and Malherbe were imprisoned in 1944, tried, and sentenced to death for their actions. They eventually were released, but, even in jail, they spread messages against Nazi repression.

“Lucy and Suzanne’s story does not easily align with how Europeans have remembered the war,” writes Jackson, who was drawn to artists after their works were rediscovered in the 1990s and 2000s. “Their story requires us to realize that the histories of women, artists, lesbians, expatriates and intellectuals mattered to the overall history of the war.”

Jackson conducted years of research, digging through archives in Jersey, as well as museums and libraries throughout the US and UK. He discovered never-before seen documents and art, including photographs the pair took of each other, drawings made in prison, and journal entries depicting their lives during World War II.

Jackson’s book takes readers inside the day-to-day struggles of civilians in occupied territory facing gut-wrenching choices. Here’s what others are saying:

“Every page is gripping, and the amount of new research is nothing short of mindboggling. A brilliant book for the ages!”—Douglas Brinkley, author of American Moonshot: John F. Kennedy and the Great Space Race

“A gripping story. The lesbian couple Lucy Schwob and Suzanne Malherbe deployed their intellectual capacities and peacetime experience in dissembling their identities to challenge the German occupiers with artistic 'paper bullets.' The contest between the baffled Nazis and the crafty traitors animates this historical thriller.”—Bonnie G. Smith, author of Women in World History

“Readers will delight in this unique and well-crafted story of wartime resistance.” — Publishers Weekly

An expert on European history and culture, Jackson is the author of Paris Under Water: How the City of Light Survived the Great Flood of 1910 and Making Jazz French: Music and Modern Life in Interwar Paris. He has appeared in documentary films and helped develop Harlem in Montmartre: A Paris Jazz Story for PBS’ Great Performances.

Signed copies of the book are available from Novel Books in Memphis. To order, click here. 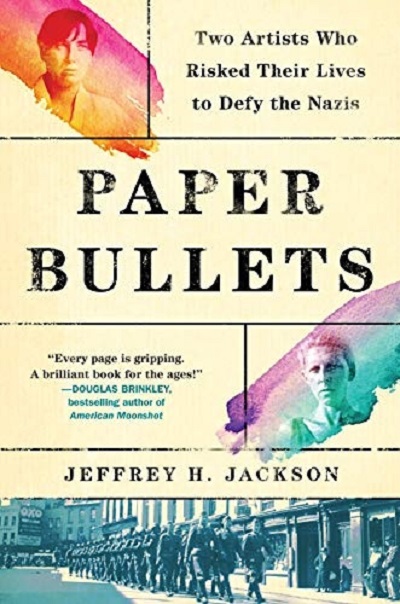