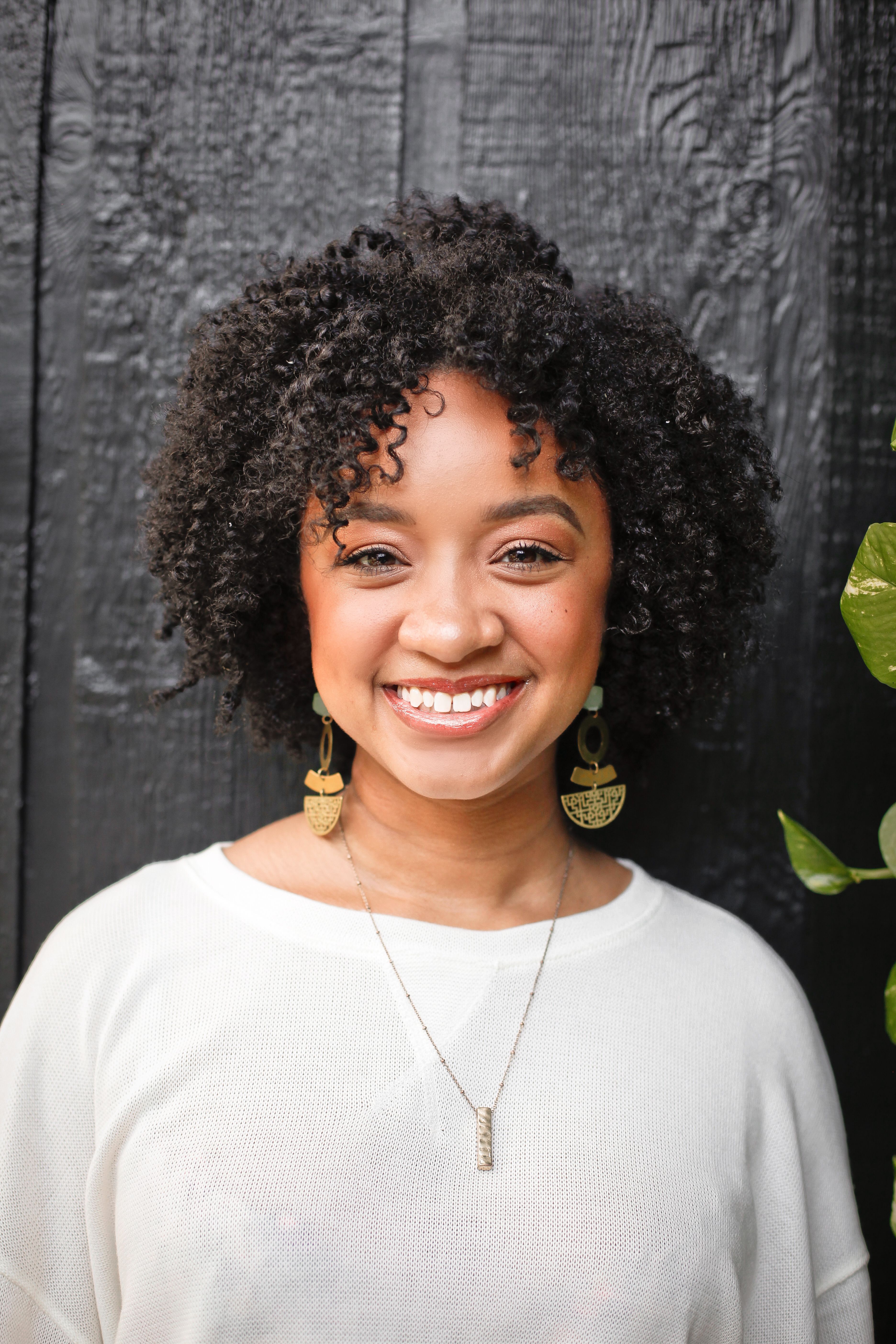 The Young Alumni Award is presented to a young alumnus or alumna who has not yet reached their 10th reunion year and who has brought honor to Rhodes through extraordinary achievement in their profession and community.

Born and raised in Memphis, TN, Chloe Hakim-Moore has devoted her electric career to uplifting the goodness and tapping into the potential of Memphis. In February 2020, Hakim-Moore delivered a TEDx Talk that outlined how her time in college shaped her commitment to wellness, and how that commitment is the foundation for her life’s efforts.

For her work thus far, Hakim-Moore was named to the Forbes Top 30 under 30 list in education; the Memphis Flyer’s 20 under 30; and the Urban Elite Professionals top 40 under 40. She was also awarded the Salzburg Global Seminar’s Young Cultural Innovators’ fellowship to expand peace and well-being globally.

Hakim-Moore is an internationally acclaimed social designer, artist, and humanitarian. She designed and leads NEXT Memphis, a $32 million initiative of Porter-Leath to equitably increase access to high quality early childhood education for all families in Shelby County.

Her past projects include:

In the community, Hakim-Moore volunteers as the Board Chair for Apple Seeds, Inc., a maternal mental health nonprofit, and serves as the public policy co-chair for the Tennessee Association for Children’s Early Education. In addition, due to her leadership in the nonprofit space, local philanthropy approached Hakim-Moore to lead the COVID-19 disaster relief for childcare in Shelby County.

Had it not been for the incredible instruction and consistent care from faculty mentors, Hakim-Moore would not work in the lanes of systems change and social movements, which are her calling. The guidance from Rhodes College, and specifically the Department of Anthropology and Sociology, equipped Hakim-Moore with a compassionate lens and well-versed skillset to catalyze meaningful change and inspire hope in the city she loves dearly. 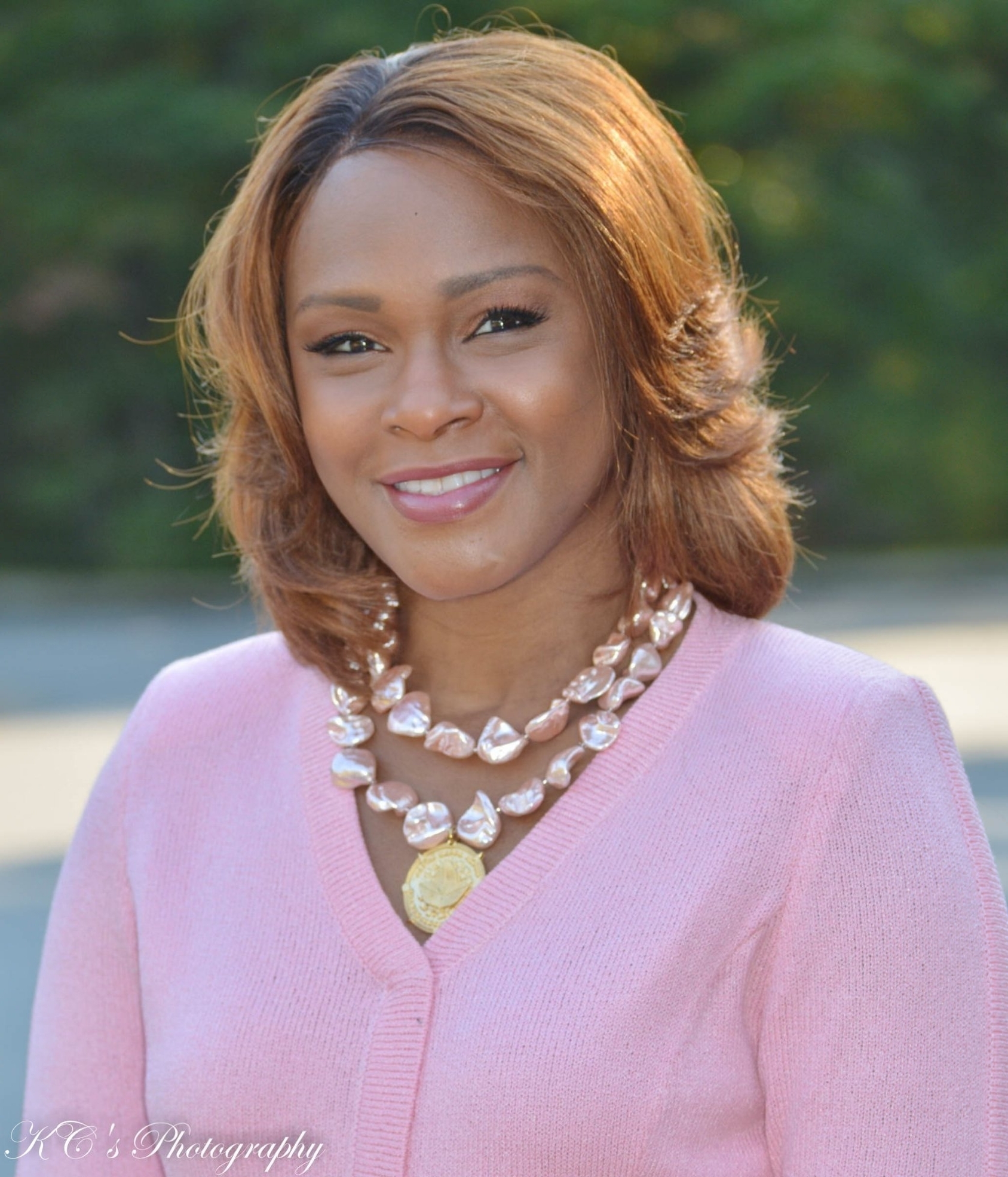 Established in 1998, the Black Student Association’s Distinguished Alumni Award recognizes African American alumni whose record of outstanding personal achievement and service to others has inspired Rhodes students and brought honor to their alma mater.

A graduate of the historical Little Rock Central High School, Melanie Hillard '92 received a B.A. in Business Administration from Rhodes College and obtained an MBA from the University of Arkansas at Little Rock. In May 2015, Hillard was awarded an Honorary Doctorate in Humane Letters by Shorter College, North Little Rock, AR.

She has been employed by Eli Lilly & Company since 2003. As a top performer, she was promoted to Executive Sales Representative in the Diabetes Specialty Division, and currently serves in the Connected Care & Insulins business unit. She has received many awards, including MVP, Market Leader, and Partnership awards.

While at Rhodes, she was initiated into Alpha Kappa Alpha Sorority, Inc. and became a charter member of the Omicron Chi Chapter (Rhodes College, Memphis, TN) and later served as president. She transferred into the Beta Pi Omega Chapter in Little Rock, AR, after graduation and has served the sorority in many capacities and all levels, including chapter president from 2015-2018. She was awarded the Outstanding President’s Award during the 85th South Central Regional Conference. During her tenure, the chapter’s membership grew and won numerous regional and international awards for its service and mentoring programs.

Hillard is deeply committed to the betterment of her community. She serves on the Board of Directors for the following organizations: The Arkansas Repertory Theatre, Arkansas Zoological Foundation, The Ivy Foundation of Little Rock, and the Rhodes College Alumni Executive Board. She also served as the 2018 Event Chair for the Walk to End Alzheimer’s.

Hillard is an active member of the African Methodist Episcopal Church,12th Episcopal District, and serves Union AME Church, Little Rock, AR, faithfully on the Steward Board as a Pastor’s Steward and the Hattie Davis Missionary Society as the 1st Vice President. She also works on the conference level as the Arkansas Conference Scholarship Commissioner.

Hillard is the wife of 25-plus years to her best friend, Jessie C. Hillard, and they have been blessed with two amazing sons, Allen and Elliott, who are kind, intelligent, and God-loving young men.

Hillard has a true heart for service and believes that “service is simply love made visible.” Above all, Hillard says she tries to live by the scripture found in Micah 6:8, “He has shown you, O mortal, what is good. And what does the LORD require of you? To act justly and to love mercy and walk humbly with your God.” 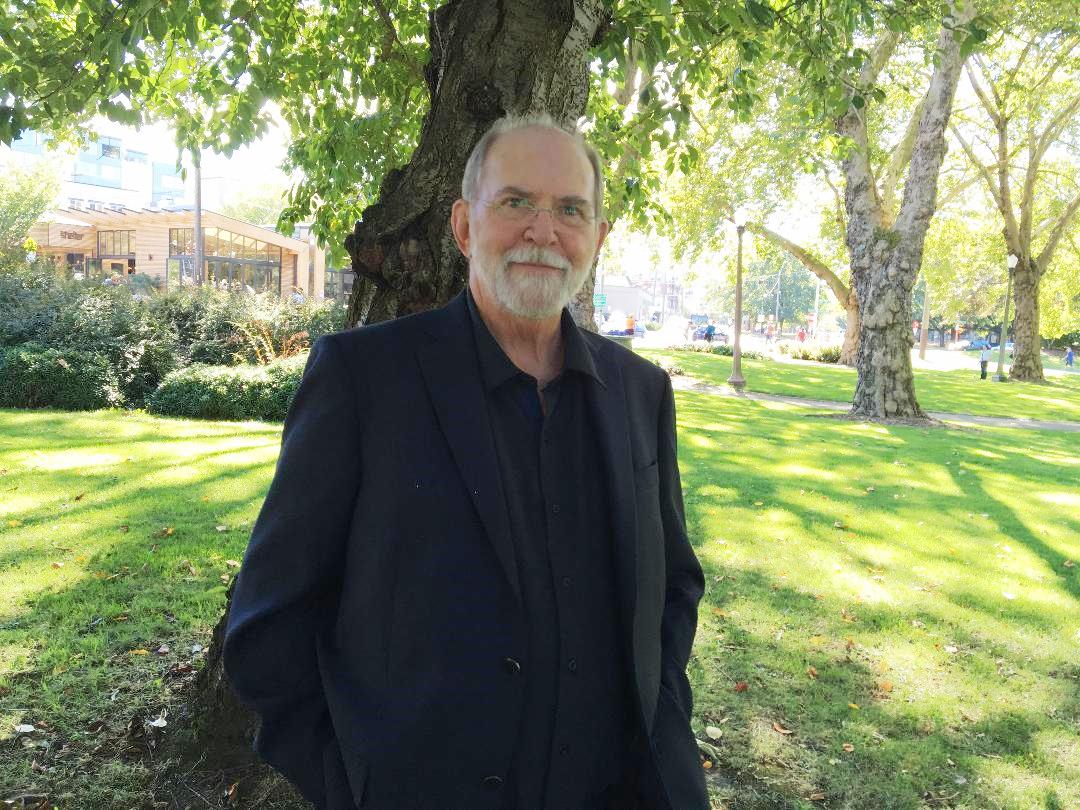 If you’ve ever caught yourself dancing impulsively to the contagious beat of “Five O’Clock World,” or consoled your broken heart by listening to Waylon Jennings sing “Dreaming My Dreams With You” on repeat, or have adopted Crystal Gayle’s “Ready for the Times to Get Better” as your 2020 anthem, you have Allen Reynolds to thank.

Before becoming a world-renowned music producer and esteemed member of the Nashville Songwriters’ Hall of Fame, Reynolds was a campus leader at Rhodes College. A native Memphian, Reynolds joined the Rhodes College community after graduating from Central High School just a few miles from campus. He was elected president of his freshman and sophomore classes, and student council president his senior year. He was a brother of Sigma Nu Fraternit, elected Social Activities Commissioner, named Omicron Delta Kappa Outstanding Sophomore, took the title of “Mr. Talent” his senior year, and was honored by his peers by being named to the prestigious Student Hall of Fame.

In addition to all of his on-campus activities, the English major was also pursuing his dream of music and sharing his talents with the greater Memphis community. In 1957, he recorded the single “Dream Boy” with then-Memphis State student Dickey Lee and several of his Rhodes fraternity brothers, including David Glenn and former Rhodes Trustee, the late J.L Jerden. The group was known as Dickey Lee and The Collegiates. The song received airtime from Memphis deejay Dewey Lewis, the first to play Elvis Presley’s record on the radio. Dewey Lewis was so impressed with the group he encouraged Sam Phillips to record them at famed Sun Studios.

While working at Sun, Reynolds met songwriter and producer Cowboy Jack Clement. Eventually Reynolds and Dickey Lee followed Clement to Beaumont, TX, to work in his studio. There Reynolds co-wrote Lee’s Top 20 pop hit “I Saw Linda Yesterday” as well as “Don’t Wanna Think About Paula.” In addition to working in Clement's studio, Reynolds also worked part-time managing the nightclub at the King Edward Hotel, where he performed twice a week.

After a few years of working part-time jobs to supplement his music career, Reynolds returned to Memphis and joined First National Bank, where he was a banker by day and songwriter by night and on weekends. It was during this period that Reynolds wrote “Five O’Clock World,” a pop song The Vogues took to No. 4 on Billboard’s Hot 100 in 1966.

Reynolds, who found himself drawn more and more to country music, finally decided to leave banking in 1970 and move to Nashville to pursue his music dreams full-time. He joined one of  Clement's studios and wrote, produced, and managed the JMI record label that Clement had established.

When JMI Records folded in 1975, Reynolds purchased Clement’s studio Jack’s Tracks on Music Row and became an independent producer. One of Reynold's first clients was Crystal Gayle, and together they would record 10 albums--five of the albums went gold, selling 500,000 or more copies, and two went platinum, selling more than 1 million copies. Seventeen singles from the albums reached No. 1 on the Billboard singles chart, including Gayle’s career-defining crossover, “Don’t It Make My Brown Eyes Blue.”

In addition to Gayle, Reynolds also produced five albums for Kathy Mattea, who went on to win the Country Music Association's Female Vocalist of the Year Award twice and a Grammy as country female vocalist of the year.

But Reynold's most successful client was Garth Brooks. He produced all of Brooks’ country albums, which together have sold more copies than those of any other artist in country music history. Nine of the albums were certified diamond, meaning each album sold more than 10 million copies.

While Reynold's has achieved great commercial success as a producer, he has also written a number of country music classics. His songs have been recorded by Johnny Cash, Jerry Lee Lewis, Chet Atkins, Brenda Lee, Don Williams, Waylon Jennings, Kathy Matea, Hal Ketchum, Emmylou Harris, Allison Kraus, and the Cowboy Junkies, just to name a few. Through his songwriting, Reynolds has captured our heartache and loss, loneliness and longing, disappointment and regret, joy and happiness, and love and hope. Most importantly, Reynold's songs have touched our humanity. His remarkable talent was recognized in 2000 when he was inducted into the Nashville Songwriters Hall of Fame and in 2016 when he was inducted into the Musicians Hall of Fame.

Reynold's music has touched millions of people around the world, broadening the appeal and influence of country music. His award-winning songs and ground-breaking work as a producer have helped shape the course of country music for more than three decades. And, he has done all of this with incredible humility and a commitment to maintaining the highest standards.

In addition to his impact on country music, Reynolds has also impacted the lives of generations of Rhodes students who have benefited tremendously from his generous support and have themselves gone on to contribute to their professions and communities. 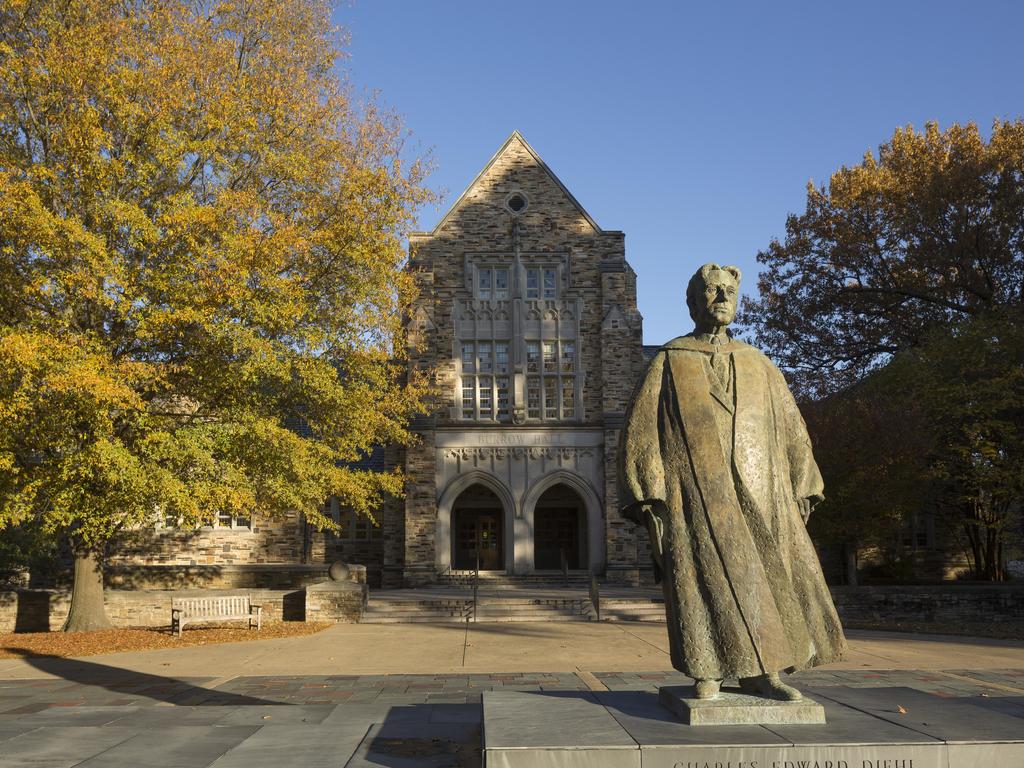