Rather than heading home or to the beach this past spring break, Amri McCauley ’19, DJ McDowell ’21, Zara Raezer ’22, Candelaria Willoughby ’22, and Younjoo Lee ’22 spent March 3-7 visiting Southern sites with historical or current importance to civil and human rights movements.

“The trip was designed to invite our students to think creatively about various responses to injustice,  and specifically the injustice that systemic white supremacy unfairly exerts power upon the bodies of people of color, for example, through slavery, mass incarceration, and imprisonment of immigrants and asylum-seekers,” says Rhodes Chaplain Rev. Beatrix Weil.

Weil and Greek Life Director Aly Ruhl led the trip, which included a bridge crossing re-enactment in Selma, AL, where in 1965 Civil Rights Movement demonstrators were  brutally beaten by armed police; a visit to the Legacy Museum and the National Memorial for Peace and Justice in Montgomery, AL; a visit to the  Sixteenth Street Baptist Church in Birmingham, AL, which was bombed by Klu Klux Klan members in 1963; and stops in Atlanta, GA, at the Refuge Coffee Co., Your Dekalb Farmers Market, Charis Books (which specializes in feminist and cultural studies), the National Center for Civil and Human Rights, and the King Center.

“I’m originally from Wisconsin, and I wanted to experience firsthand the deep history behind the South,” says Lee. “The trip was a way for me to actually put into context the meaning behind the Civil Rights Movement, as well as experience the physical infrastructure. Furthermore, I’ve always had a strong yearning for social justice, and wanted to explore more methods on how to serve justice.”

“I decided to go on the trip because it was a meaningful way to meet new people and see new places. Plus, I knew Chaplain Beatrix would help us get the most out of the trip,” says McCauley. “I learned the importance of ‘reading the landscape’ and learning by being present, as well as paying attention to and analyzing your surroundings.”

“I spent a great portion of high school studying the Civil Rights Movement, and so I saw the trip as an opportunity to experience the places I had only read about,” adds Willoughby. “I am glad I went on the trip as it allowed me to become increasingly well-versed in the Civil Rights Movement and in social justice as a whole . . . I will continue to be active in the community through volunteering, formerly serving at the Refugee Empowerment Program and now the American Red Cross.”

The Rhodes group did some volunteering in Birmingham, AL, at the Adelante Alabama Worker Center, which unites day laborers, domestic workers, and other low-wage and immigrant workers and their families to defend their rights and promote their dignity. While there, the group learned about the “Shut Down Etowah” campaign made up of individuals and organizations that are committed to ending the human rights abuses at the Etowah County Detention Center in Gadsden, AL.

“After learning about the complex system of detention centers in America there, we wrote letters to the Sheriff and County Commission of Etowah County Detention Center to encourage them to rethink the current system,” says Weil. “Additionally, we wrote notes of encouragement to a group of asylum-seekers who have been detained in a detention center in El Paso, Texas. The individuals are in the middle of a hunger strike protesting the conditions of the detention center, and their detainment.”

“There was a lot of brainstorming, and we approached the initiative from multiple angles, while also asking numerous questions that served to enrich our understanding of the situation in Etowah,” adds Lee. “I think this activity really showed the reality behind social justice work. It takes a lot of effort, knowledge, and hard work.”

The Rhodes group also volunteered with an after school program at Clarkson High School in Clarkson, GA,  and during a panel session answered questions about the college application process, student life, and paying for higher education.

“I am extremely grateful for this trip, as I learned a lot about the South, the U.S., the education system (and the ways that it lacks), the criminal justice system, and myself and where I stand in the midst of all of this,” says Lee. “I will be able to apply what I’ve learned in two main contexts. One being my circle, as in informing my peers, professors, and family members on what I’ve learned. Another being the larger community, as I plan to volunteer at a local nonprofit here in Memphis. I will also continue to advocate for equal education and human rights. As for the greater future, I hope that my education at Rhodes College will help me find more meaningful and impactful ways to serve justice in my community, and outside the walls as well.”

Pictured below: Rhodes Chaplain Rev. Beatrix Weil and Greek Life Director Aly Ruhl (front, l-r), along with the Rhodes group, sharing Thai food with and learning from Kennesaw State University professor Dr. Rodolfo Aguilar (back, center), who helped the group connect the themes of the trip. 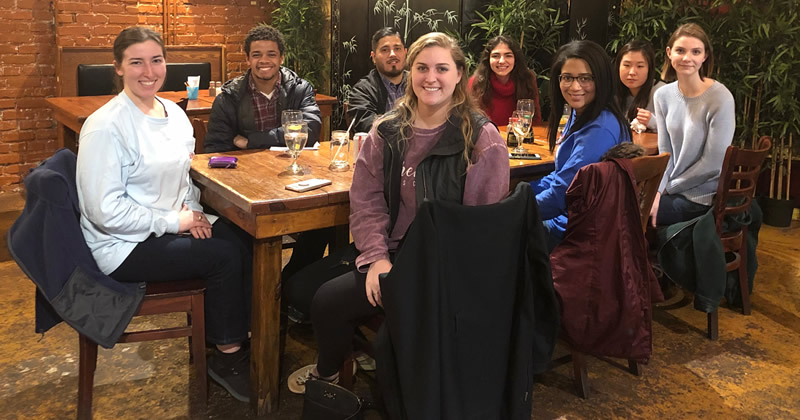