On April 4, a collaborative project between Calvary Episcopal Church, Rhodes College, and the National Park Service resulted in a new historical marker being unveiled at the site of the antebellum slave mart operated by Nathan Bedford Forrest in Downtown Memphis. Last fall, Dr. Timothy S. Huebner, the Irma O. Sternberg Professor of HIstory, and students from the Historical Methods class drafted the text for the marker, which was then vetted by a group of local scholars, including Dr. Charles McKinney, the Neville Frierson Bryan Chair of Africana Studies at Rhodes, and approved by the Park Service. Their efforts also received grant support from the Tennessee Civil War National Heritage Area. While the original 1955 marker on the site simply states that Forrest’s “business enterprises” made him wealthy, it fails to note that his primary business operated on that site was slave trading. 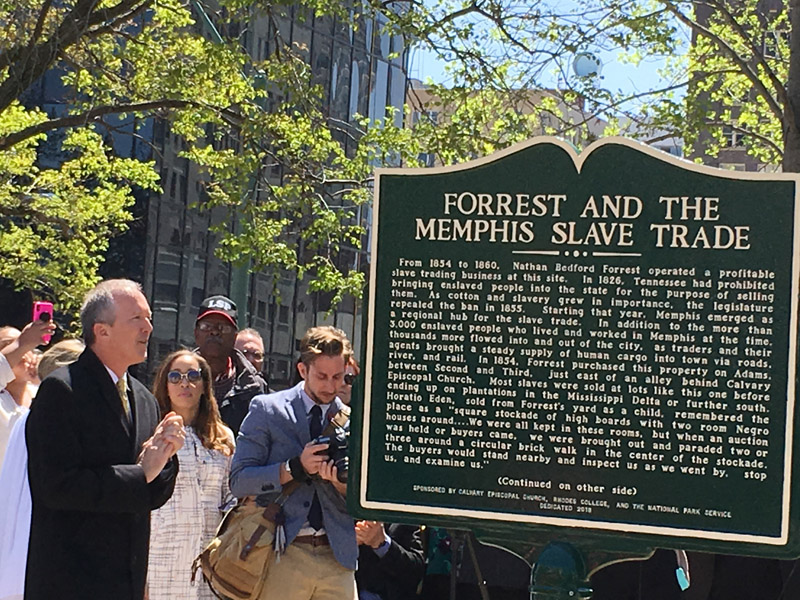 Dr. Timothy S. Huebner (far left) at the unveiling of the historical marker.

The day of the ceremony, Calvary hosted a Service of Remembrance and Reconciliation that included reflections by Sarah Eiland ‘20, a Rhodes history major who worked on the project; the Rev. Dorothy Wells ’82; and the Rev. Scott Walters, Rector of Calvary. The Rhodes Singers also participated.  Near the conclusion of the service, the names of dozens of the men, women, and children who were sold at the site were read out loud by members of the community—names that a small group of Rhodes students had unearthed through careful research in local archives.

Jay Albertson ’19, a member of the class that oversaw the draft of the marker’s text, says the reading of the names was especially emotional. “You could hear the speakers getting choked up, and you could hear the audience sniffling or making mournful noises. But about a third of the way through the reading, everyone in the pews stood up. We had a program, which of course tells the congregation when to stand, but it didn't instruct us to stand up during that part. But everyone did—I’m not sure who started it, but that kind of thing just sweeps over a group of people. Later, at the unveiling outside, Tim Goode from the Park Service mentioned that he would always remember that everyone stood.”

Eiland, a Mobile, AL, native who was instrumental in researching the names of those sold at the site, says, “This has been an eye-opening experience that has shaped the way I view the importance of history and my own personal interests. It has shaped my research interests going into the future. I've also gained a new passion for telling the stories of people that have not yet been told, or have been purposefully silenced. That is what had happened to the stories of Memphis and its slave trading past.”

Albertson, from Brentwood, TN, says that, although the new marker provides a more educational experience for viewers than the old marker, “It's up to everyone on their own to take the information we've gathered about the people who were sold there and reconcile that. At the ceremony, one of the reverends said our work is not over as long as Black people are still disadvantaged, even in our immediate home of Memphis. So what happens next is that, hopefully, people are armed with knowledge and moved to go forth and change things.”

Below are the remarks by Sarah Eiland ’20 and Rev. Dorothy Wells ’82 during the Service of Remembrance and Reconciliation and by President Marjorie Hass at the dedication of the historical marker. 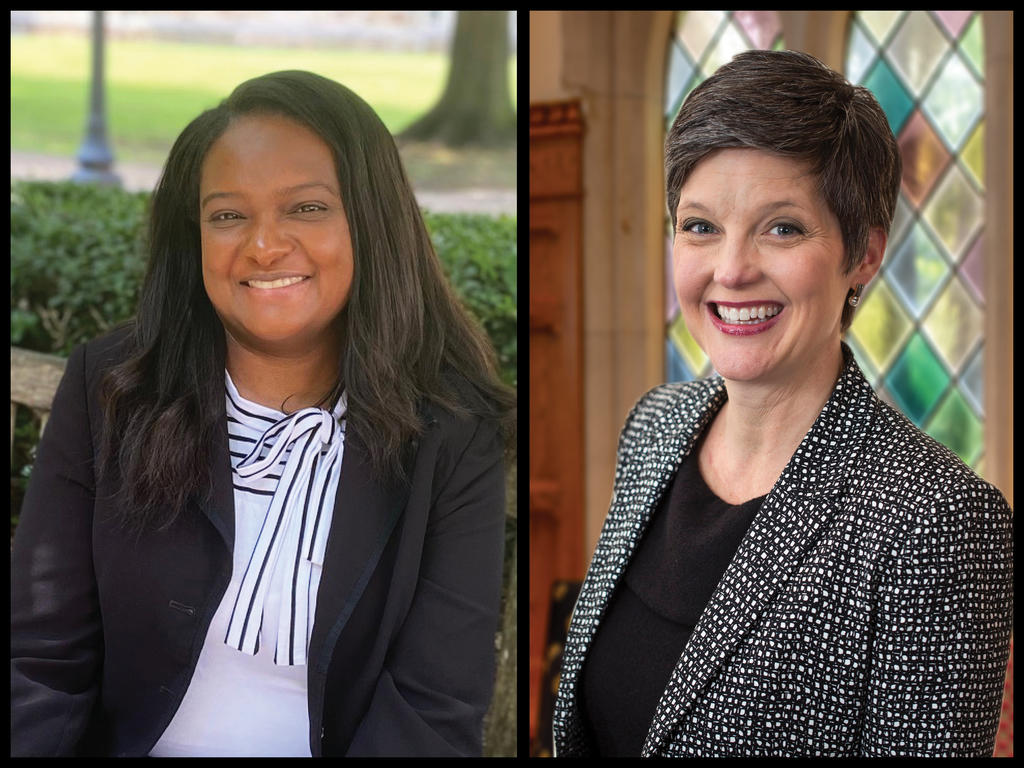