Katy Smith ’19 Commissioned as Officer in the U.S. Marine Corps

Katy Smith, mathematics major from Virginia Beach, VA, was commissioned as a second lieutenant in the United States Marine Corps in a ceremony on campus Dec. 15.

Smith participated in ROTC her first and sophomore years at Rhodes, and then she enrolled in the Marine Corps Platoon Leaders Course, which is a source for college students who wish to become commissioned officers in the United States Marine Corps. Participants in the program are trained over the summer in a physically demanding environment where sleep deprivation, military tasks, and memorization are constantly forced on candidates to test their ability to handle stress. During another summer, participants take the Officer Candidate Course. Training pillars include leadership, physical fitness, and academics. After successfully competing training and the requirements for a four-year degree, participants are commissioned as second lieutenants in the United States Marine Corps.

Over the past two summers, Smith successfully completed 12 weeks of Officer Candidate School in Quantico, VA. A member of the Class of 2019, she recently completed coursework at Rhodes for the Bachelor of Science in mathematics.

At Rhodes, Smith also served as a resident assistant, an event assistant, secretary of the Allocations Board, and president of Rhodes Spaces. In addition, she served as a member of the Kappa Delta sorority, Model United Nations, and the women’s swimming and diving team.

“As for my next step, I will be attending The Basic School for officers for seven months and then the Military Occupational Specialty School,” says Smith. “I am hoping to be a combat engineer and am very excited about these new opportunities.” 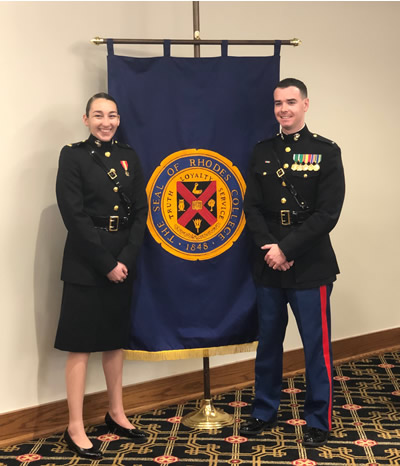