From Physics to Politics, Communication is Key for Eleanor Hook

When Eleanor Hook moved to Italy as a teenager, she learned something unexpected: math really is the universal language. She had always planned to study psychology when she got to college, but in a high school where everyone spoke Italian, she found the equations and symbols used in math and physics easier to understand—and soon discovered she not only liked math, she was good at it. Now a physics major and math minor at Rhodes College, Hook is interested in all aspects of these subjects, from research to local outreach to legislative policy.

Hook, the current president of the Rhodes chapter of the Society for Physics Students (SPS), is actively involved in community outreach. "I've worked with everyone from preschoolers to residents of an assisted living home. We present demonstrations and talk about science, and they say, 'It's magic!' And they learn something,” says Hook. "These demonstrations have also really helped me to present myself, whether on a stage, with an audience, or professionally." In 2017, the Rhodes chapter of SPS received a Future Faces of Physics Award from the National Office of SPS for a grant proposal written by Hook. Only about five of these are awarded each year, and they are intended to fund activities for groups traditionally underrepresented in physics. The grant was used to host an egg drop competition for Memphis girls ages 8 to 13; contestants designed and constructed protective containers for eggs, which were then dropped from the sixth floor of Rhodes Tower. The event was so successful, the Rhodes Allocations board is funding it for a second year.

Her involvement in SPS also made it possible for her to apply for one of the many internships that the organization offers to physics students across the nation. She was awarded the AIP Mather Public Policy Internship, giving her the opportunity to live and work in Washington, DC, with other SPS interns for 10 weeks during the summer of 2017. Hook worked with the minority staff on the House Committee for Science, Space and Technology doing background research, attending legislative hearings, and preparing documentation materials. 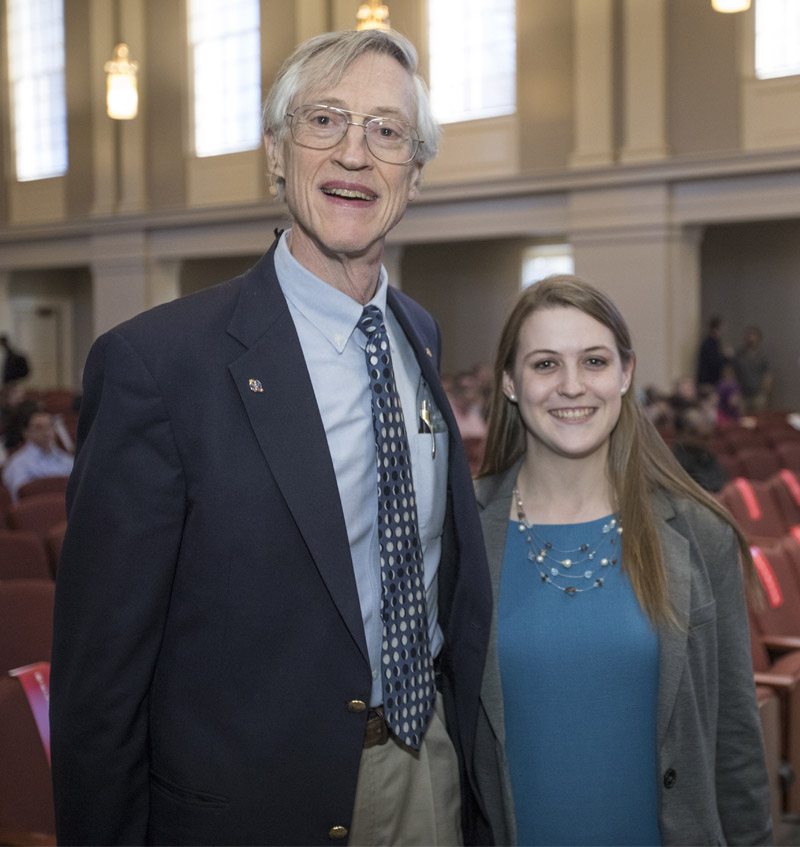 Hook says that her liberal arts background helped her apply science concepts and research into the political sphere. In turn, she realized the value of taking physics out of the traditional lab. "There's a perception of the scientist living in an ivory tower, who is out of touch with the everyday person and who doesn’t really engage with the public,” explains Hook. “That's something that we need to counteract by getting scientists actively working in politics."

The internship, which is funded by the John and Jane Mather Foundation for Science and the Arts, was founded to give undergraduate physics students hands-on experience in the policymaking process of the federal government. Dr. John Mather is a Nobel Laureate in physics and also the senior project scientist for the James Webb Space Telescope, which is due to launch in 2020. Hook was able to meet Mather while in Washington, and, once back at Rhodes, arranged for the SPS chapter to meet with him over Skype. She also made introductory remarks for Mather when he visited Rhodes as the Peyton Nalle Rhodes Lecturer for 2018, bringing their connection full circle.

While definitely defying the myth of the ivory tower herself, Hook has put in more than her fair share of time in the lab. She has worked with associate professor of physics Dr. David Rupke since her first year at Rhodes, including a summer on campus. Rupke, whom she considers a mentor, also made it possible for her to work with some of his colleagues in Australia for a summer.

Over the last few years, Rupke’s lab at Rhodes has been analyzing and interpreting data obtained from quasars using a technique called integral field spectroscopy, information that can add to our understanding of galaxy evolution. As one of the researchers on Rupke's team, Hook “cleans up” this data, for instance by correcting for instrumental issues or atmospheric interference, so that it is ready to be analyzed. Recently, the work done in the lab at Rhodes was used in an Early Science Release research proposal by Rupke and a team of U.S. and international astronomers for the James Webb Space Telescope. When NASA launches the telescope in 2020, the team’s research proposal on observing quasars will be one of only 13 proposals, out of more than 100 submitted, accepted for the telescope’s initial round of science observations.

Hook, who will graduate this May, plans to pursue a career in science communication.