“Cemeteries are as much for the living as they are for the dead,” says Rhodes Institute for Regional Studies fellow and economics major Elizabeth Mueller ’23, who has been conducting research on how local history is revealed by grave symbols and iconography in Memphis’ Elmwood Cemetery. “When a loved one dies, family and friends make decisions about how form, symbolism, and epitaph will embody the deceased for eternity. This emotional imprint left on graves grants us insight into beliefs and values and perceptions of mortality that were most important to a certain time and people. Even with just a simple understanding of grave symbolism, anyone can compare the values between individuals, cemeteries, regions, and nations.”

Established in 1852 as one of the first rural cemeteries in the South and listed on the National Register of Historic Places, Elmwood Cemetery is Memphis’ oldest cemetery where burials still occur. Among its park-like grounds, majestic ornamental trees, and seasonal gardens, visitors enjoy ongoing events and programs, such as outdoor movies and book club meetings. As part of the Soul of the City walking tour, actors in period garb deliver reenactments and history-based narratives about those buried on the grounds, including civil rights leaders, famous writers and musicians, dignitaries, civil war veterans, slaves, steamboat disaster victims, suffragists, madams, and outlaws.

Among Elmwood’s dearly departed are victims and martyrs of the yellow fever outbreak that struck the Mid-South in 1878. For Mueller’s Rhodes Institute for Regional Studies research topic, “The Southern Rural Cemetery: Using Grave Symbolism to Analyze Reactions to Epidemic Death in the Nineteenth Century,” she is using the epidemic as a case study of a key event of overwhelming death that might change how a population perceives death. Her research reveals firsthand accounts, including the letters of Dr. William J. Armstrong, who cared for the sick during the 1873 epidemic and again in 1878 until his death.

“Elmwood Cemetery is a rural cemetery, a type most easily identified as a 19th-century cemetery that embodies Victorian romanticism through lush natural landscapes embellished by winding pathways and elaborate monuments,” says Mueller. “These romanticized feelings surrounding death permeated the symbolism of this period and added to a centuries-long grave marker language, so I decided to use grave symbolism as an indicator of perceptions of mortality. For any event in which there is a great deal of mourning, we might see reflections of that event in grave iconography. These visual representations can add meaning and unity to our own mourning, especially in the face of COVID-19.”

In addition to conducting research during the eight-week Rhodes Institute, fellows explore Memphis and the region through field trips and student-faculty interaction. “My project’s faculty mentor is Prof. Shaolu Yu, and I am grateful to her for guidance and feedback,” says Mueller, who is from San Antonio, TX.  “I was not familiar with Memphis history before coming to Rhodes. However, I am an avid consumer of it now. The city is so varied in cemetery types that one can see and learn so much, from Elmwood to the Bettis family plot behind the Poplar Avenue Home Depot to the National Cemetery to historically Black cemeteries such as Zion. Cemeteries have always interested me, but I never considered studying the cemetery in an academic space, especially as an economics major.” 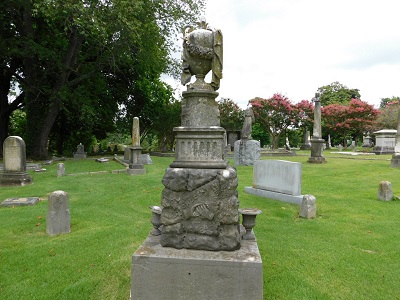 Another interest of Mueller is art, and it was in Professor of Art Erin Harmon’s painting course that Mueller first learned about Elmwood Cemetery. “She offered it as a source of inspiration for another student’s project, and I knew I needed to visit. Much of my art involves my own ancestors and explores my relationship to those who passed away in my lifetime. My favorite part about Rhodes is the ability to explore my interests through academics. In classes and through programs such as the Rhodes Institute for Regional Studies, I can tailor my studies to my interests and strengths with the support of faculty and staff.”

At the end of the summer, Rhodes Institute for Regional Studies fellows submit their projects to a permanent digital collection. Mueller plans to continue her research beyond the program and publish her work within the next year.

“There is much room for expansion within this realm of using cemeteries as historical records of a people, place, and time. I could further explore how the South altered cemetery use during widespread epidemics or how the South used them to bolster an idealized identity after the Civil War. I am most interested in discovering a method for comparing different cemetery landscapes to each other and diving more into the larger-picture landscape instead of more individualized graves like I did in this research paper. As I mentioned before, Memphis has a lot to offer in this area.”