Marcus Pohlmann Retires at the Top of His Game

Mock trial—a hotly contested academic matchup—is much like basketball: the brackets, the court, the championship. Rhodes’ professor of political science Marcus Pohlmann has an affinity for both. In fact, he played basketball in high school and college, and even had NBA fantasies. Pohlmann stood out on the court, but admits he was shy when it came to speaking in class and in front of people. “But much against my will initially, I took a public speaking class that really changed the trajectory of my life. It brought me out of my shell,” he says.

Now after 42 years of leading classroom discussions, giving public lectures and media interviews, and coaching mock trialers on how to argue cases, Pohlmann has packed up the award plaques adorning his office wall on the third floor of Buckman Hall, and retired.

Some weeks ago, when the moving boxes were still empty, Pohlmann shared memories about his career, family, and life in Memphis and at Rhodes.

The 6-foot-5-inch Pohlmann played basketball well enough in high school in his hometown of Davenport, IA, that he landed a scholarship to Cornell College. He started out majoring in pre-law and speech, but eventually changed over to political science. Pointing to a framed print of Robert F. Kennedy on his office wall, Pohlmann says he has always admired the politician, having gotten the chance to hear him speak during the 1968 presidential campaign. “I developed an interest in politics I don’t think I had until that campaign,” Pohlmann recalls.

With his major course requirements completed by his senior year, Pohlmann took a year of intensive education courses and earned a teacher’s certificate, which he says opened up the world of teaching to him. He did his student teaching in Cedar Rapids, IA, where he taught in a large public high school. Thinking back, Pohlmann grins. “My supervisor dumped his teaching load on me. I was teaching four courses a day in U.S. government, but I loved it.”

At Cornell, Pohlmann also met his wife Barbara, who has taught elementary school over the years and served as a coordinator for some of the mock trial tournaments hosted by Rhodes. They graduated on one weekend and got married the very next one. Pohlmann won a scholarship to Columbia University for graduate school. “My mentor was Charles Hamilton, who wrote the book Black Power with Stokely Carmichael,” says Pohlmann, glancing over at five shelves of neatly placed mementos, including a photo of Hamilton. Pohlmann earned two master’s degrees and a doctorate in political science from Columbia, and went on to hold teaching positions at Bates College, The College of Wooster, and Arkansas State University, before beginning his 32-year tenure at Rhodes.

When Pohlmann started at Rhodes in 1986, he was one of three professors in the Department of Political Science, where he taught the constitutional law course. “One day, I got a postcard saying ‘This is the third year of the American Political Science Association’s national mock trial tournament at Drake University in Des Moines, IA. Is your college interested in sending a team?’ ” says Pohlmann. “I went into my con law class and picked six students, and we got funding from the college for transportation.” The group had a quick rules session with well-known Rhodes alumnus and attorney Mike Cody ’58, and went to Des Moines.

“We thought we were terrific, but I think we won only a couple of ballots,” Pohlmann laughs. “We stuck around to the final round to see how mock trial is really done. We learned. Also in the early days, being from Tennessee, we may have been the school that had traveled the farthest. It was very much a Mid-Western event in the beginning.” 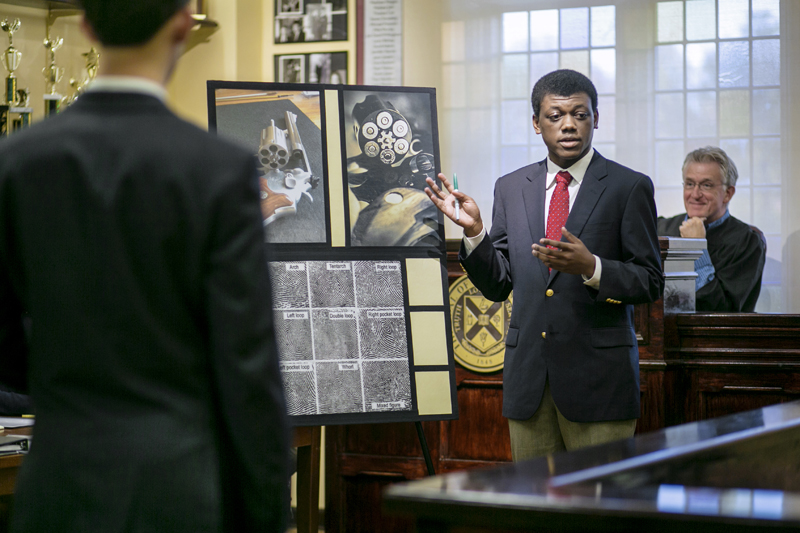 Pohlmann at the judge's bench in the mock trial courtroom in Buckman Hall listens as Thomas Mitchell '18 presents evidence.

A mock team consists of six to 10 members, ideally with a captain, an attorney coach, and an educator coach. Students learn how to think on their feet, communicate, persuade, and understand court procedure. At one time, students prepared for tournaments by transporting case materials—exhibits, photographs, affidavits, expert reports, etc.—to a courtroom in Downtown Memphis. It wasn’t until 2000 that Rhodes alumnus  and Memphis attorney Paul Guibao ’96, who had been on Pohlmann’s mock trial team, worked with his family’s foundation to fund construction and outfitting of a courtroom on the third floor of Buckman Hall. Named in honor of Pohlmann, it was dedicated in 2000 and renovated in 2015.

An invitational tournament at Cornell College also is named in honor of Pohlmann. During the fall, schools hold their own invitational tournaments to prepare for American Mock Trial Association (AMTA) sanctioned tournaments in the spring: regionals in February, the opening round championship series in March (mock trial’s own “March Madness”), and the national championship tournament in April. Rhodes has repeatedly hosted opening rounds in Memphis, inviting Tennessee attorneys and judges to take part in the courtroom drama.

“We have had four national championships and have been runner-up four other times. We have made it to the national tournament every year that we have competed,” Pohlmann says with a smile. “The college has been so incredibly supportive of me and of the students, and this includes all of the college’s presidents since I’ve been here—presidents Daughdrill and Troutt and now President Hass. The college has allowed me to incorporate mock trial as part of my job and teaching load, and this has allowed me to build continuity into the program.”

In 2006, in recognition of his dedication, Pohlmann was among the first individuals inducted into AMTA’s Coaches Hall of Fame. He also began a two-year term as AMTA president that year.

Among photos of grandchildren and other family members in his office are photos of mock trial teams. “People who’ve competed with each other tend to stay in touch. I probably attend a wedding or two every year,” says Pohlmann. “The mock trial program has helped keep alums connected to the college, generating some contributions and producing new students. The son of one of my first mock trialers is coming here this year.”

In the mid-1990s, Pohlmann also started the mock trial program at Houston High School, where his son participated. Pohlmann says his son was shy like he once was, but mock trial helped him to be a more confident speaker. “He is a tech guy now. He and the grandchildren are why we’re moving to Denver, CO. We want to be closer to them,” explains Pohlmann.

Pohlmann says a few years back, when he was pondering retirement, he and the college administration discussed ways to put in place resources and personnel to continue the program’s legacy. “We developed a position for Anna Eldridge ’02 called mock trial director, and I feel very comfortable that I’m leaving the program in good hands.” In the summer of 2016, Eldridge organized Rhodes’ first Mock Trial Academy for high school students. “The demand is pretty significant now.”

Pohlmann describes himself as a discussion leader in the classroom. “I have pretty high standards and expect my students to do the readings and come to class prepared. I try to pick readings that are sometimes controversial, that will make them think, and even make them mad. I like to push them outside their comfort zones.” 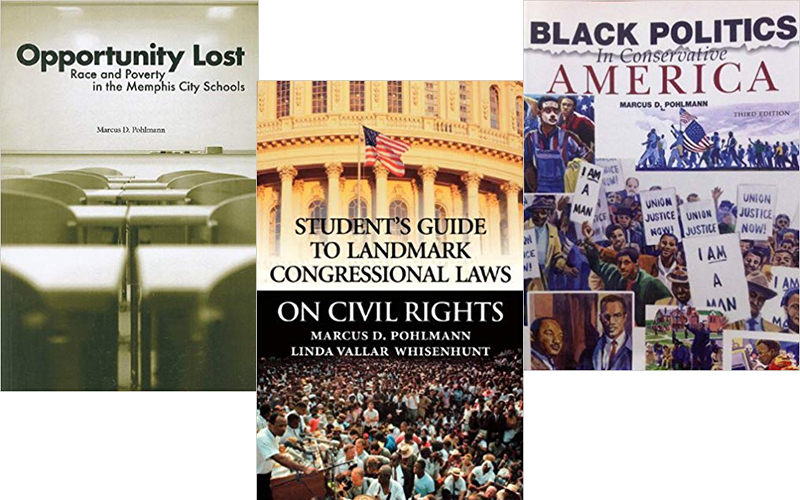 As a researcher, Pohlmann has written extensively on racial politics, urban politics, poverty, voting rights, constitutional law and civil liberties, education policy, and Memphis and Tennessee politics. He’s regularly called upon by the media to give interviews on these subjects.

“The jobs I’ve had have been near cities, such as Memphis, allowing me to study them. Memphis has rich ground to plow,” says Pohlmann. “It’s been fun to speak and consult related to the city, but it’s also been fun to watch the city grow in the last 30 years.”

Along with other basketball memorabilia in his office, Pohlmann has a Memphis Grizzlies flag hanging over a stained glass window. “I think my loyalty to the Grizzles is as much about Memphis and the notoriety they have brought here,” he explains.

Once settled in Denver, Pohlmann may attend a few basketball games, but his current plans are to do some teaching and reach out to a speakers agency for opportunities. But he says he will always cherish his memories of Rhodes. “We have lot of friends and connections here and will come back periodically for sure. It really has been a great run.”