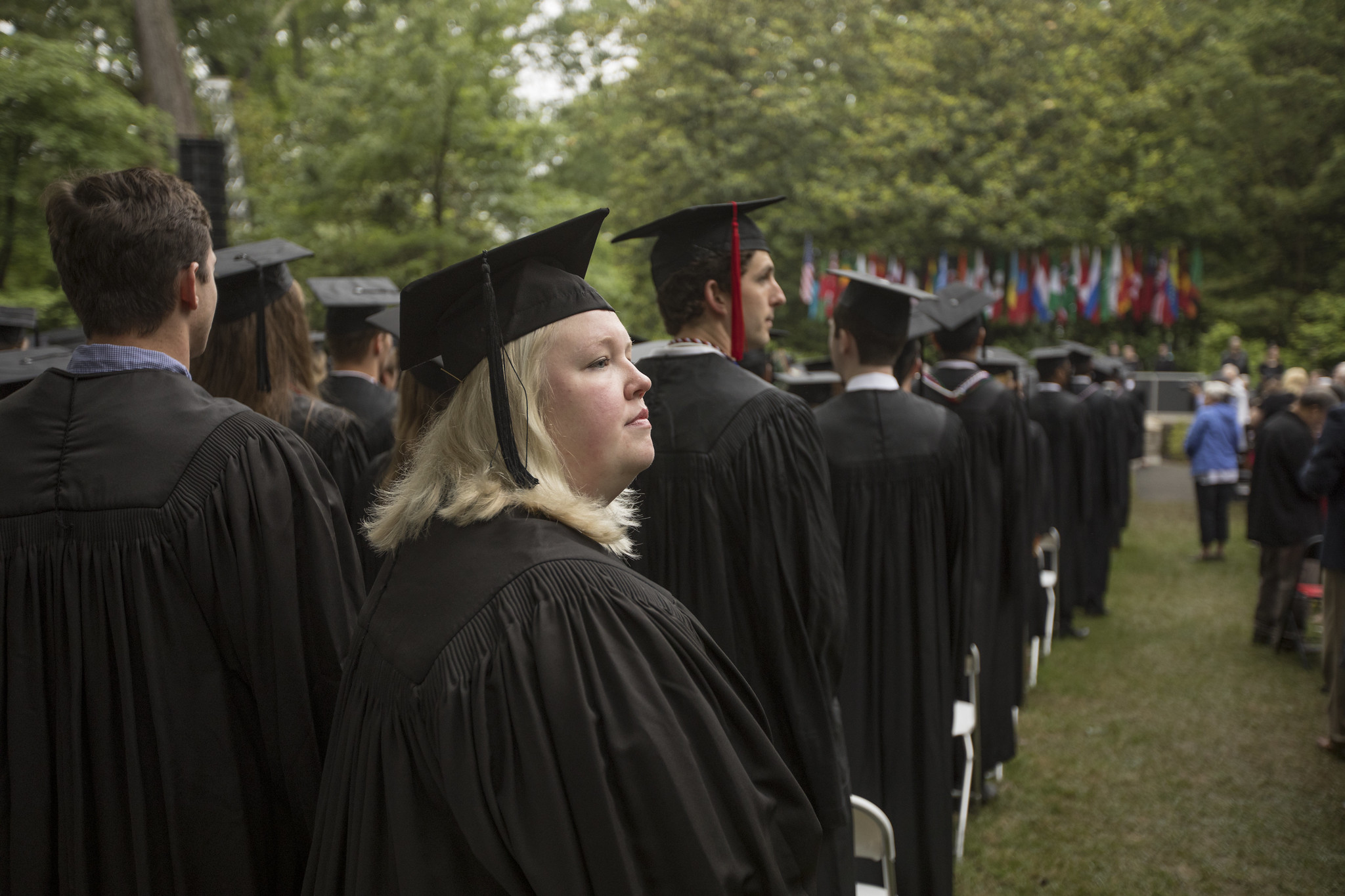 Annual awards were presented at the 170th Commencement Exercises of Rhodes College, held May 11 on campus.

Anna Baker-Olson was awarded the Peyton Nalle Rhodes Phi Beta Kappa Prize, the college’s highest academic honor. It is awarded to the graduating senior who has best demonstrated an exceptional combination of scholarship, creativity, and achievement and a commitment to the liberal arts and
sciences.

The 2019 Algernon Sydney Sullivan Awards were presented to graduating seniors Alex McTaggart and Allison Young and Greater Memphis Chamber CEO Beverly Robertson. The awards are presented annually to two graduating seniors (one male and one female) and one non-student who have given selflessly to others and the college. Rhodes alumni Russell Wigginton ’88 and Daniel Hatzenbuehler ’71 each received the college’s Distinguished Service Medal.

MORE ABOUT THE RECIPIENTS

Anna Baker-Olson is a political science and psychology double major from Zionsville, IN. In her junior year, she accepted membership into Phi Beta Kappa, America’s oldest collegiate honor society that champions the liberal arts and sciences. She also is a member of Pi Sigma Alpha (political science), Psi Chi (psychology), and Triota (women’s studies) honor societies.

One professor wrote in nominating Baker-Olson for the award, “Anna’s intellectual maturity is closer to that of an exceptional Ph.D. student. She absorbs scholarly literature like a sponge, regardless of whether she is reading a text by Rawls, a treatise by Locke, a neuroscientific study of differences in the way partisan brains process information in varying ways, or a book-length account of emotion and rhetoric in political advertisements.” Another professor described her as “deeply collaborative” and “a good conversationalist with joint attention to ideas and persons, to the subject under discussion, and to the complex humans engaged with those subjects.”

Baker-Olson has participated in the Community Narrative Research Team (CNRT) focused on undergraduate students’ experiences of community engagement over time. Although the research was housed within the psychology department, it crosses disciplinary lines and has implications for multiple fields. For her honors research, Baker-Olson examined more than 400 narrative accounts by Rhodes students of their experiences in community service. Her final paper recommendations will guide innovations in training for participants of the Rhodes Bonner Scholarship Program.

In addition, Baker-Olson has presented her research at one national conference and two international conferences, in Canada and the Netherlands. She has also contributed as a co-author to two publications with her psychology professors. This summer, she will participate in the conference of the Society for Community Research and Action held in Chicago. She also will travel to Thailand to serve as a Fulbright English Teaching Assistant for the 2019-2020 academic year.

Alex McTaggart, who is a history major from Elm Grove, WI, has been described by his peers as brilliant, joyful, and someone who makes everyone feel comfortable whenever they are around him. On campus, he has served as a Shelby Foote Collection Fellow and a member of the Student Athletic Advisory Committee. A year-round participant in track & field and cross country, McTaggart was a member of four consecutive Southern Athletic Association (SAA) Championship Cross Country Teams and a member of the 2018 SAA Championship Track & Field Team. Off campus, McTaggart has served as a public history extern at the National Civil Rights Museum, and his work with Just City, a nonprofit in Memphis that focuses on reforming the criminal justice system, has been the perfect place for his relentless drive to serve others. McTaggart will be a Fulbright English Teaching Assistant in Lithuania for the 2019-2020 academic year.

Allison Young, a biology major from Florence, SC, consistently has demonstrated the values of service to both her college and the greater Memphis community. In addition to leading the women’s basketball team as captain, she held many leadership roles in student organizations such as the Rhodes Outdoor Organization and Lynx Club. She also was a Diplomat for the Office of Admission. Young’s community involvement includes working with young women at Girls Inc., interning at St. Jude Children’s Research
Hospital, coaching youth for the Memphis Grizzlies Foundation’s Grizzfit program and for the Ira Samelson Jr. Boys and Girls Club, and teaching English with the Refugee Empowerment Program. Most recently, Young received the prestigious Fulbright U.S. Student Award, which will allow her to teach in Malaysia for one year.

A native Memphian, Beverly Robertson has worked in the community as a special education teacher, director of internal and external communications at Holiday Inn Worldwide, president of the National Civil Rights Museum, and, currently, as the president and chief executive officer of the Greater Memphis Chamber. For almost 30 years, she and her husband, Howard, have owned TRUST Marketing and Communications. But it was during Robertson’s 18-year tenure at the National Civil Rights Museum that she embraced the mutual benefits of a partnership with Rhodes by welcoming student interns and hiring graduates, as well as collaborating with faculty on civil rights history projects the would broaden the reach of the museum and enhance the overall educational experience for students. Robertson set a powerful example for how other nonprofits could work with the college in mutually beneficial ways.

A member of the Rhodes Class of 1971 and retired chairman of E. Ritter & Company, Daniel Hatzenbuehler  has devoted his time to various Rhodes advisory committees, planned-giving councils, class reunion committees, campaign study groups, and scholarship selection panels. However, his election to the Board of Trustees in 2010 began a new level of commitment to the college. Hatzenbuehler served as a member of board committees on Trusteeship, Student Life, and Audit and Enterprise Risk. He also accepted additional assignments, including volunteering as a Trustee-in-Residence for the Career Services office, as a member of the Rhodes Common Table, and as a member of the Commission on Campus Culture. In addition, Hatzenbuehler has served on the Search Committee for the 20th President of Rhodes, the Principles of Discernment Committee regarding the names of campus buildings, and the president’s Legal Affairs Advisory committee. Hatzenbuehler’s values and commitment to the college also have been demonstrated through his establishment of the Hatzenbuehler Summer Ministry Fellowship for Social Justice and the initiation of support for LBGTQ and social equality studies in the Department of Psychology. A longtime member of the Charles E. Diehl Society, he has continually supported initiatives that directly impact students and faculty.

Student, alumnus, faculty member, staff member, vice president: Few individuals in Rhodes’ history have experienced the college from so many perspectives, but Russell Wigginton has experienced them all. A member of the Rhodes Class of 1988, he returned to his alma mater in 1996 to teach in the history department. In 2003, then-President Bill Troutt tapped him to serve as special assistant to the president to build meaningful partnerships in the Memphis community. Wigginton did this so diligently and successfully that he was named vice president for college relations and external programs. His work included the leadership and oversight of grants, foundations, and corporation and government relations, and he was a crucial member of the team that raised $314 million in the college’s most recent capital campaign. During this period, Wigginton served on a variety of advisory boards, including Arts Memphis, the Urban Art Commission, the Memphis Symphony Orchestra, the National Civil Rights Museum, the Memphis Zoological Society, Ballet Memphis, the New Memphis Institute, the Memphis Literacy Council, Facing History and Ourselves, the Metropolitan Inter-Faith Association, and the Boys and Girls Clubs of Greater Memphis. In 2017, Wigginton was tapped by President Marjorie Hass to serve as vice president for student life and dean of students. His ability to connect with students, and his genuine care for each of them, has set an example for the entire campus.